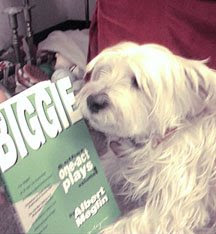 Watch out Oprah - Here comes Miss Julie, Stageplays's blogger, offering serious competition on the "Book Club" front. Not only is Miss Julie a contender for new book business, she also claims bragging rights for having the lead character in The "Biggie" named in her honor - true story, we can't make this stuff up. Playwright Al Meglin, having come under Miss Julie's charms, christened his main character, the Social Director for Crystal Harmony Cruises in his one-act, The "Biggie", after our own Miss Julie. Them's some apples!

We are thrilled to announce the publication of our newest book - The "Biggie" and Other One-Act Plays, Volume 1, by Albert Meglin, a collection of one-act plays and dramatic monologues, released this month. (Volume 2 will be out in June) With Volume 1, we have created what the market needs - a great collection of new, never before produced material for actors of all ages, ethnicities and skill levels, that could be used at the college/university level, for community theatre, and even regional theatre productions. The material is especially fresh and funny, and suitable for auditions and classroom exploration, as well as showcase and waiver productions. The "Biggie" and Other One-Act Plays contains six one-act plays, and two dramatic monologues, and includes both comedies and drama. Roles vary from ages 15 to 75, with the majority of characters castable by actors in their 20s and 30s.

As regular attendees at graduating student showcases, and actor's showcases and scene nights, year after year we come away with the same thought: the scenes lack imagination and are often unactable, characters are not well written, the material borders on psycho drama and actors are not showcasing their craft and potential well enough to prove their hireability. We said "enough already, it's time for some new stuff..." and set out to create it. The result is a stunning collection with a fantastic wealth of material for actors, and young actors in particular, that provides a great read for anyone interested in dramatic literature as literature.

Here's the back story. This project has been a labor of love - as in, we love the playwright and it took a ton of labor - his and ours - to create the book. After using every bit of creative persuasion at our disposal, over a period of several years, we were able to convince Al Meglin that developing all his one act plays and putting them in a collection would be a worthwile activity: the work would be available to actors as the plays would be in published form, ready for purchase in bookstores, on the internet through our web site, and more readily available for licensing for production. (Little did we realize that Al had enough material for a two-volume collection; and here we are 12 one-act plays and 4 dramatic monologues later, at the end of the process, having developed them all!)
There's a very good, and very real, reason behind our describing Al Meglin as a master of one-acts. Al began his writing career in live television, where the format requires 24 minutes of material for a half-hour hour show, 48 minutes for a one-hour show. By necessity of having to write to a specific show length, Al became very skilled at writing in this particular format. For the stage, every good one-act play has a three act structure, and through the doing of it, in combination with great story-telling, insights into compelling themes and a refined sensitivity to human behavior, Al became a master at writing the one-act play. He has the special ability to create a complex story involving wonderful, "meaty" characters, and then craft a dramatic situation that results in a finely structured one-act play, sometimes one only 7-8 pages in length. You have to read it to believe it. Or, better yet, come see it in action - at the Harvard Club in New York City on March 9th.
As a preview of the playwright's voice, Miss Julie thought it would be a good idea to post Al's introduction to the book, but she ran out of energy...as you can see in the picture below...she can be a very sleepy dog sometimes...but there's always next post!
Posted by Stageplays Theatre Company at 4:08 PM 1 comment: 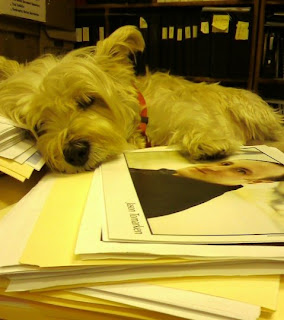 Welcome to Miss Julie’s Blog, Stageplays Theatre Company’s forum for news about our community – actors, playwrights, directors and designers – all who participate in our activities and share our interests. Expect to read posts about the theatre – plays, actors, performances, special events, play readings - and about films, concerts and other events that might be of interest.

But first, let’s start with what's most important! The theatre? Not this time! The dog! Our "theatrical" dog – Miss Julie – Stageplays’ Company Mascot, named after Strindberg’s most famous character.

Those of you who have visited our office, may have met Miss Julie, our Cairn terrier (we’d give her age but that would limit her castability - let's just say she looks younger than she is). Here’s Julie's picture – she's weighing in with an opinion on some casting (doesn't everyone), her paw rests on Jason Tomarken’s headshot. (Jason distinguished himself in several readings with us this year.)

Not only is she cute, she's a great kisser and, true to her nature, she can manipulate anyone into giving her a treat (the first word she learned – kiss. Second – candy!) Miss Julie is a reminder to us of the simple things in life - the way she lives her puppy life, with purpose in her every pursuit, joy and curiosity in her every activity; always at the ready to play, and always ready to love with affection and loyalty.

Observing Julie reminds us one of Fellini's observations about actors, making a point about acting with a purpose, with intention, knowing who you are as a character, what you want, and why you do what you do, etc. To paraphrase Fellini: You put a dog on a set and the dog will not make a move without first knowing where he is going....and why. You put an actor on a set without giving him direction and he will start behaving in bizarre ways, saying all sorts of nonsense, doing strange things for no reason and without purpose… Sometimes acting can be as simple as life. Something Miss Julie knows instinctively, and we know all the better for watching her.

So, it’s Miss Julie’s Blog ‘cause “she’s got vision when all the rest of us are wearing bifocals.” (Paul Newman/Butch Cassidy and the Sundance Kid).

Posted by Stageplays Theatre Company at 11:48 AM No comments: